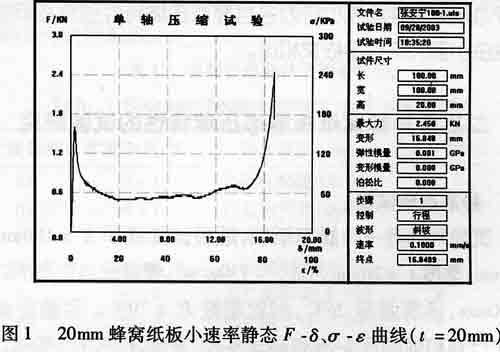 From Fig.1 and Fig.2, it can be seen that the static compression characteristics of honeycomb paperboard under the two kinds of compression rates all show four stages of elasticity, elastic-plasticity, plasticity and compaction deformation; the stress peak generated during the elastic stage is the stress generated during the plastic stage. The value is about 2 times.

Based on the static compression characteristics of the single-layer honeycomb paperboard above, the following inferences can be drawn:

In the process of compressing multi-layer superimposed honeycomb paperboard, when the yield strength of each layer is different (that is, the stress peak in the elastic phase), the minimum yield strength layer should first yield and break, and then the other layers will yield in the order of the yield strength from small to large. , Elastoplasticity, plasticity and compaction deformation in various stages; When the performance of all layers of honeycomb paperboard is the same, the layers will yield at the same time, and undergo elastoplastic, plastic and compaction deformation stages.

Because the honeycomb paperboard can hardly guarantee the performance in the production process is completely consistent, even if the performance of the two-layer paperboard cut from the same paperboard is also slightly different, so the paperboard layers should also yield in turn, undergoing elastoplasticity, plasticity and compaction Deformation stages. The static compression characteristic curve should also be added in order of the yield strength of the static compression characteristic curves of each layer.

The film has excellent heat sealing performance and excellent transparency, is one of the main packaging composite base materials, used in the production of high-temperature boiling film, vacuum aluminum coating film, the market is very optimistic.Moreover, with the development of domestic production equipment, some of the technical indicators have reached the international advanced level.As a result, the threshold to enter the film production is lower and lower.Because of this, some enterprises rush to import the flow of film production line in order to reach the designated position, the higher the level, the better, while leaving the market demand and the return on investment aside, which will cause huge waste of resources.